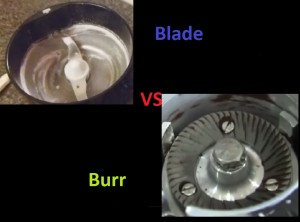 When grinding your coffee beans, blade coffee grinders do not really “grind” the coffee beans. Instead they chop th

e beans with a blade which is turning around at a high speed. The finenes is controlled by how much time you let the blade grinder on. The advantage of blade grinder is that it is relatively cheap and can be found in almost any store. Also those grinders can be very small. They are usually grinders for basic use. They are also found in older coffee mills as the method is quite simple.

The problem that can occur right away is that if you want to grind very finely, you have to let the grinder turned on for a long time, which in turn results in a signifficant heat created by the blades. Another problem with blade grinders is that no matter how much time you grind, you will still skip cutting some beans and you will be left with grinds which are uneven in size. This means that brew quality will be inconsistent.

The example of a blade grinder is Technivorm Moccamaster KM4 TT

Burr coffee grinders actually “grind” the coffee. They have two plates (burrs), one of them is spinning around, while the other one remains stationary. The positioning of the burr is what regulates grinding size and type. This enables it to grind coffee beans in uniform size of particles. It also gives flexibility to grind to coarsness of fineness that suits most for the type of coffee you need to brew. It produces more consistent grind. There

flat burrs and conical burrs on market. As with the blade grinders, the burr grinders might also produce heat and also static when grinding. When grinds build up in static charge, they will attach themselves to anything. This will make you some cleaning problems. To avoid that it is wise to choose some low speed models, because then the static is smaller and also beans heat up slower. Usually conical burr grinders are better because they turn slower. Also when buying them it is worth noting from which material they are made. If they are made from more quality materials, they  will last longer. They also usually control grind size and have different motor power.

The minuses of burr grinders are that they are more expensive (the price also fluctuates depending on a quality). Also messiness can be a problem if they are slow.

The example of a burr coffee grinder in the same price range is Breville smart grinder BCG800XL.

About the Author: Coffee barista

I make your choice of buying a grinder easier!